Historically, a comparison of the tiger (Panthera tigris) versus the lion (Panthera leo) has been a popular topic of discussion by hunters, naturalists, artists, and poets, and continues to inspire the popular imagination. In the past, lions and tigers reportedly competed in the wilderness, where their ranges overlapped in Eurasia. The most common reported circumstance of their meeting is in captivity, either deliberately or accidentally.

Physical and behavioral comparison
Behavioural comparison
Both the lion and the tiger have fearsome reputations in their native areas in relation to prey, sympatric predators, and people. Both may prey on humans, though rates of man-eating tend to be higher for the tiger. 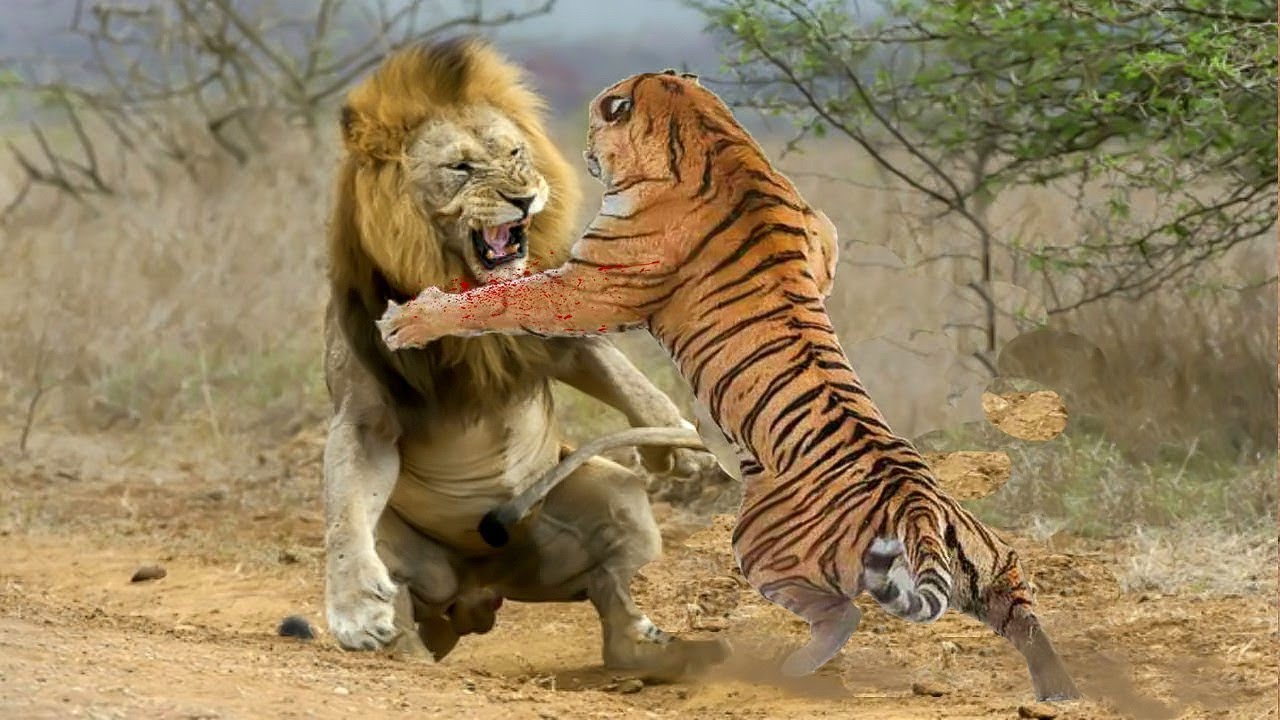 The lion is usually a social animal, while the tiger is solitary. For this reason, even if tigers had individual advantages over lions, such as in intelligence, lions often killed tigers in captivity by ganging up on them, whereas tigers tended not to form fighting gangs.
Lions roam in prides of up to 30 individuals headed by a mature male or group of related males, until an incumbent male is killed or driven away by a new male leader. The majority of single roaming lions tend to be males preparing for maturation and assimilation with a new or existing pride. While male lions are generally larger and stronger than female lions, it is the close-knit female pride alliance that typically hunts and provides for the pride. By contrast, tigers are often solitary, though they do socialize. During a mating tryst, a tiger and tigress are hostile to other creatures, with the same applying to lions.
More specifically, however, the Asiatic lion has similarities and differences with both its African relative and the tiger. For example, Asiatic lions are social like their African relatives, and females may be promiscuous. However, the structures of the prides of African and Asiatic lions vary, with male Asiatic lions usually associating with females during times of mating, similar to tigers, and whereas Asiatic lionesses and tigresses may practice promiscuity in order to defend their cubs, African lionesses are believed not to do it for that purpose.

Coexistence in the Eurasian wilderness
Currently, India is the only country confirmed to have both wild lions and tigers, specifically Asiatic lions and Bengal tigers. Though they do not share the same territory, they did in the past, and there is a project mentioned below that could lead to their meeting in the wild.

Before the end of the 20th Century, Asiatic lions and Caspian tigers had occurred in other Asian or Eurasian nations, including Iran. As such, there is a word for ‘Lion’, which can also mean ‘Tiger’, and is used in Iran, South Asia and other areas, that is ‘Sher’ or ‘Shir’ (Persian: شیر‎), and its significance is discussed below.

According to Colin Tudge (2011), given that both cats hunt large herbivores, it is likely that they had been in competition in Asia. Despite their social nature, lions might have competed with tigers on an individual basis, as they would with each other.

Apart from the possibility of competition, there are legends of Asiatic lions and tigers breeding to produce hybrid offspring, which would be ligers or tigons. From the fossil record, besides genetics, it would appear that the modern lion and tiger were present in Eurasia since the Pleistocene, when now-extinct relatives also existed there. Additionally, in the days before Indian Independence, the Maharaja of Gwalior introduced African lions into his area, which is a habitat for Bengal tigers.

T-12 the Bengal tiger in Ranthambore National Park, Kathiawar-Gir dry deciduous forests’ ecoregion, India
The possibility of conflict, between lions and tigers, had been raised in relation to India’s Asiatic Lion Reintroduction Project, which was meant to introduce the Gir Forest’s lions to another reserve which is considered to be within the former range of the Asiatic lion, that is Kuno Wildlife Sanctuary in Madhya Pradesh, before December 2017. Kuno was reported to contain some tigers that came from Ranthambore Park, including one called ‘T-38’. Concerns were raised that the co-presence of lions and tigers would “trigger frequent clashes.” The University of Minnesota’s Lion Research Project describes one reason to delay the introduction of lions to Kuno Palpur, is the fear that tigers living there would kill the incoming lions. In a one-on-one encounter, it is believed that a Bengal tiger could beat an Indian lion, given its weight advantage. Despite the fact that the habitats of Indian lions and tigers are similar means that they both live in conditions that favor solitary hunters of prey, these lions are social like their African relatives, and may form fighting groups, whereas tigers are usually solitary. The american biologist Craig Packer considers that a group of lions (two to three males) or lionesses (two to four females) is more than a match for a single tiger or tigress (see § Temperament). Craig Packer is of the opinion that, in order for Asiatic lions to survive in an area with Bengal tigers, the lions would have to be translocated there as intact groups rather than as individuals.

Reginald Innes Pocock (1939) mentioned that some people had the opinion that the tiger played a role in the near-extinction of the Indian lion, but he dismissed this view as ‘fanciful’. According to him, there was evidence that tigers inhabited the Indian Subcontinent before lions. The tigers likely entered Northern India from the eastern end of the Himalayas, through Burma, and started spreading throughout the area, before the lions likely entered Northern India from Balochistan or Persia, and spread to places like the Bengal and the Nerbudda River. Because of that, before the presence of man could limit the spread of lions, tigers reached parts of India that lions did not reach. However, the presence of tigers throughout India did not stop the spread of lions there, in the first place, so Pocock said that it is unlikely that Bengal tigers played a role, significant or subordinate, in the near-extinction of the Indian lion, rather, that man was responsible for it as was the case with the decline in tigers’ numbers. As such, Pocock thought that it was unlikely that serious competition between them regularly occurred, and that even if Indian lions and tigers met, the chance that they would fight for survival was as good as the chance that they would choose to avoid each other, and that their chances of success, if they were to clash, were as good as each other’s.